With the Force eTap AXS SRAM brings a more affordable alternative to the revolutionary RED eTap AXS group. Based on the same technologies as the top group, the Force group offers not only a higher bandwidth, but at the same time smaller gear jumps. What sounds contradictory at first moment is made possible by the new X-range transmission variants of the Force DUB crank in combination with the Force 12-speed cassette. Thanks to the 10er pinion of the cassette smaller chainrings are enough to achieve the same maximum unfolding as with a 11er pinion. With a wide range of gear ratios and as 1-speed and 2-speed version, the eTap AXS is just as versatile as the intended use of bikes with drop bar is today: from gravel bike to time trial machine, the right Force eTap AXS group can be assembled. The new AXS technology (pronounced "access") offers you via the smartphone app the possibility to adjust the circuit to your personal preferences, evaluate your shifting behavior or make firmware updates. In addition to the freely selectable assignment of all switching buttons, the circuit can also be operated in semi-automatic mode. In this mode, the rear derailleur and front derailleur synchronize independently and you only have to choose between a lighter and heavier gear.

Crank
For a wide range of applications of the crank, the crankshaft was developed for the new DUB Road bottom bracket standard. About the corresponding DUB bottom bracket, the crankshaft is compatible with all common bottom bracket shells. Equipped with new tooth profiles and a harder coating, the chainrings offer a longer life compared to the Force 22 chainrings. With the SRAM Quarq AXS Powermeter Kit available in our store, the crank can be geupgradet if necessary to a power measurement system.

Shift brake lever
With only one shift lever per handlebar side and their simple shift logic is a shifting with the eTap shifters almost impossible. The switching process runs precisely, quickly and easily. The revised ErgoBlade Composite levers are good in the hand and the wide eTap shifters are not to miss even with winter gloves. In addition, they give a haptic and acoustic feedback to the driver when shifting. For additional shifting options, 1 Blip shift knob can be connected per shift lever.

HydroHC Hydraulic-Road-Disc (HRD) brakes.
Due to the unnecessary shifting mechanism in the brake lever, the encoder piston could be perfectly integrated into the shift/brake lever. As a result, the hoods are smaller, fit more harmoniously into the overall appearance of the bike and are even better in the hand. The Contact Point Adjustment also ensures better ergonomics. About a hexagonal screw can be adjusted exactly the pressure point of the lever without affecting the distance of the brake pads. Even the lever width when the brake is not applied can be adjusted to the hand size via a hexagonal screw.

Paceline brake discs | Center Lock
The new Paceline brake discs pick up the elegant design of the eTap AXS Road shift groups. They have a newly designed braking surface with also newly designed ventilation holes for an even smoother and lower vibration braking performance. The rounded edges on the top of the disc minimize the risk of injury and comply with the guidelines of the cycling world governing body UCI. As a further advantage, they facilitate the Laufradeinbau, because the rounded top prevents canting in the brake caliper.

Rear derailleur
The eTap AXS rear derailleur provides a revised motor and improved data transmission for even faster shifting. The speed-dependent orbit fluid vibration damping ensures, even in off-road use, a safe chain guide. Enlarged shift rollers make the drive even more efficient compared to the previous version. Equipped with an additional ANT+ transmitter, the rear derailleur can communicate with bike computers and information on the battery charge level and the current gear can be displayed.

Cassette
In the mountain bike area for years proven, the 10er pinion now holds entry on the road bike. This is made possible by the new SRAM XDR freewheel standard. The advantages are obvious: With the same bandwidth, the cassette can be built even lighter. Compared to the previous version, the shifting gates have been further optimized and adapted to the electronic eTap AXS rear derailleur. The result is even faster and smoother shifting. The pinions made of tool steel are connected with the SRAM Mini Cluster design via pins. For further weight optimization, the largest pinion is made of aluminum.

Chain
The new SRAM Force chain was designed from scratch. Their unique flattop design of the plates allowed the chain to be narrower and lighter. The resulting greater distance of the outer plates to the sprockets provides a smoother chain run and even more precise shifting. As a positive side effect, the life of the chain is also increased. This is additionally ensured by a chrome coating of the inner plates and the rollers.

Weight according to manufacturer: n/a
Weight self-weighed: from about 2570g (without bottom bracket; without brake discs) 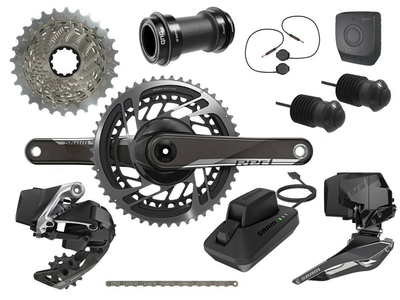 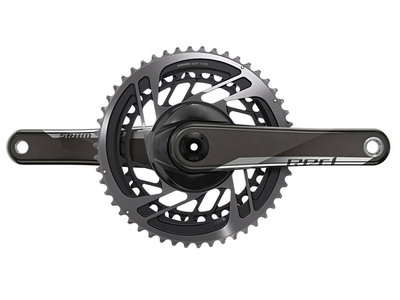 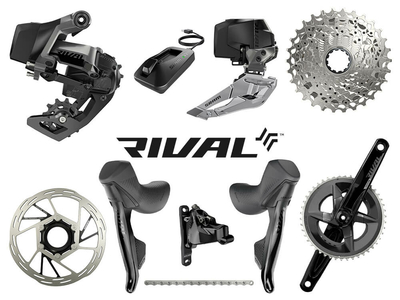 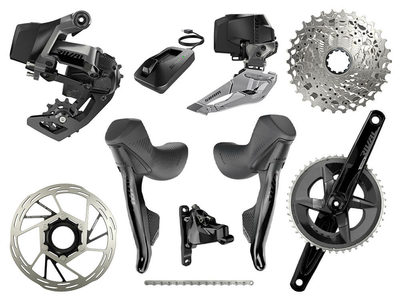